A Declaration of No Thank You to Tokyo Olympics July 22nd, 2018

by No Thank You to 2020Olympic Disasters Link

Two more years are left until the Tokyo Olympic & Paralympic Games. An outrageous amount exceeding sum total of \3, 000,000,000,000 is said to be the expense for a month’s sports event, with its breakdown dubious and its ceiling unknown.

Though the sports event is named “Recovery( from Fukushima Disasters) Olympics, ” the money that should go for the recovery has been and is planned to be spent in wasteful ways.

The unreasonably tight-scheduled construction of the new National Stadium caused the death of a construction worker. In the canoe race to compete for the Olympics entry, a racer put forbidden drug into a competitor’s drink, an incident symbolizing the victory-is-all idea of the Olympic Games.

In spite of the fact that the Olympic and Paralympic Games are causing social conflicts here and there, the mega-event tends to cover up the conflicts with the veil of sports festival, creating an atmosphere which makes you hesitate to even speak of these conflicts.

We, for a change, have decided to perceive the Tokyo Olympics not as a “festival” but as a “disaster.” It was that “Fukushima is under control” declaration by Prime Minister Abe that prompted us to do so. That declaration of Abe’s does intrinsically symbolize the nature of Tokyo Olympics: all it brings us is “disasters” to our everyday lives.

The Modern Olympics have constructed new facilities and infrastructures always destroying natural environments and the lives of the residents who have faced eventual eviction from the areas. Last summer the number of forcibly evicted residents in Rio amounted to more than 77,000, while 970,000㎡ of nature-abounding area being ravaged. In Tokyo the same kinds of violence have been attempted depriving the residents of their living rights: eviction of 300 families from Metropolitan Kasumigaoka Apartment House to build the new National Stadium, expulsion of nojukushas (sleep-outers) from the Meiji Park and its abolition for the construction of Japan Sports Association& JOC building. These are exactly “Olympic Disasters.”

In June 2017 the Conspiracy Act justifying its enactment as a measure to protect the Tokyo Olympics from terrorists’ attacks was forcibly passed in the diet. Quite a number of detectives from the Public Security Investigation Agency keep their close eyes on such rallies and meetings as ours. Anything seems to pass unquestioned in the name of anti-terrorism and civil surveillance to suppress all kinds of anti-Olympic views and actions is beginning to be subtly tightened up. This is also an “Olympic Disaster.”

Tokyo Board of Education has distributed Olympic Guidebooks and Study Notebooks to schools where pupils/students are made to attend 35 hrs./yr. of Olympics study. We already feel an atmosphere growing where negative comments about the Olympics are not welcome. Forced mobilizations of pupils and students to games and related events are expected, which will be another “disaster” to school kids.

These are only a few of the “Olympic Disasters,” more and more different genres of which will become apparent from now on.

In January 2017, we startesud a movement to declare “No Thank You” to “Olympic Disasters.” Since then we have come across unexpectedly many “No Ｔhank You” declarations around us. We need to make them seen and socially vibrant. In the course of two years, we will strive to make No-Thank-Youists surpass Welcomists through flexible criss-crossings of various types of No-Thank-You’s. We will make our efforts to discuss with great sports and/or Olympics lovers and try to share with them what we mean by “Olympic Disasters.”

Our anti-Olympics movement for 2020 summer in Tokyo, stands together with those in Rio (2016 summer), in Pyeongchang (2018 winter) and in Peking(2022 winter). Modern Olympics, when seen globally, have lacked full support of the hosting civil societies, which fact encourages us to cherish the international anti-Olympics solidarity.

We are not alone. Hoping to meet many more No-Thank-Youists with two more years left to decline, we declare loud and clear our “No Thank You.” “We don’t want Tokyo Olympic and Paralympic Games.”

No Thank You to 2020Olympic Disasters Link kicked off on January 22,2018 with a decision to perceive the Tokyo Olympics not as a “festival” but as a “disaster.” We aim to link our No Thank You to

Olympics movement to those in and out of Japan, decline the 2020Tokyo one and put a period to the history of the Modern Olympic Games

Quoted Comments of No Thank You to Olympics

Things proceed not at the will of the locals but at the interests of the ward/municipal offices and general constructors. by Atsumi Masazumi(a local resident in the New National Stadium area)

The Olympics rob us of the pleasure sports could hold for us. by Yamamoto Atsuhisa (sports sociologist)

Sports should be liberated from Olympics. by Okazaki Masaru (education critic)

Japan is still under the Emergency Declaration of the Nuclear Severe Accident. by Koide Hiroaki

Nobody believes that there is such a thing as “ Recovery Olympics.” by Sato Kazuyosi( IwakiCity councilor)

It’s a lie that Olympics cannot be held without the Conspiracy Act. by Miyazaki Toshiro (No! to

A 500 -year-old forest was cut down for the three-day Alpen races. by Lee Ｋyung Yeol (Anti-Olympics

In Rio a great number of poor people were evicted out of their residing areas. by Giselle Tanaka(Rio’s Comite Poplular, architect, urbanologist, organizer of the 2016Exclusive Games) 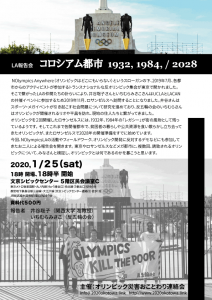 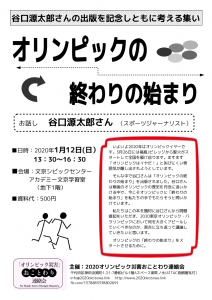 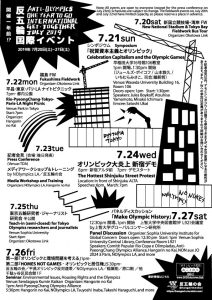 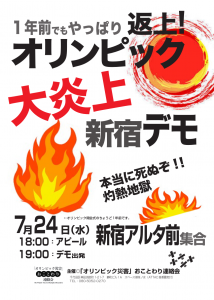